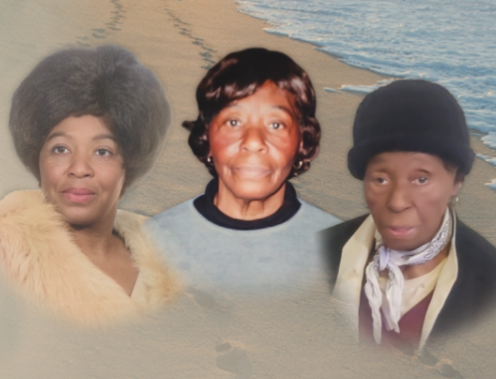 Fannie Bell Terry, 94, was born in Kewanee, Mississippi, in 1928; she was the fifth child of the late Mitchell and Sarah Ann Nettles DeBruce. Fannie’s magnetic and shiny personality stood out from a young age among her family, who lovingly nicknamed her “Sapphire.” In Fannie’s youth, she worked on her family land as a farmer; she enjoyed singing. In her younger years, she cut a few records as she traveled throughout Mississippi, Alabama, and Georgia, singing gospel music and preaching the word of God.
Fannie Bell married the late Lenton Terry Sr, and they began to build a family. In the search for a better life for herself and her blossoming family, she moved from Mississippi to Moultrie, Georgia, then Philadelphia, and finally settled in Akron, Ohio. Fannie raised eight children of her own, Lenton “Jinx” Jr., Clinton, James Lewis, Annie (Noel), Dr. Ollie (Jones), Odis, Alice, and LaLonnie Terry; however, Fannie was a mother to those who needed love, kindness, and a good meal. She loved being a mother, and it showed. She was known to “steal” her grandchildren from her children. Fannie would boldly tell her children, “your momma don’t know how to raise kids,” and then she would say to her grandchildren, “don’t you want to live with me.” Fannie “loved her children,” and extended love beyond her lineage; she had so many adopted or acquired children throughout her years her house was filled with love and a pot of collard greens and cornbread to nourish the body and the soul.
Fannie’s love for children propelled her into working as a Head Start teacher in the Akron Public School system. She ministered to young men and women on the goodness of God and how He can bring you through all challenges in life as an evangelist and missionary at Hill’s Temple First Born Church, where she was ordained and licensed in 1977 by the late Bishop Oscar Hill as a Missionary. Embodying a Proverbs 31 woman, Fannie was clothed with strength and dignity…She spoke with wisdom and faithful instruction… She watched over the affairs of her household. Many women do noble things, but Fannie surpassed them all. Her insight and guidance lead her family and her strength, love and determination created a model of womanhood to follow.
Fannie Bell was short in stature but a mighty and strong woman. When anyone tried to bully her, she would take them down by body-slamming the biggest man to the ground and sitting on him, drinking a hot cup of coffee while waiting for the police to arrive. She loved gardening, and you could count on a harvest of collard greens, tomatoes, snap peas, okra, and squash planted in her garden. Fannie loves the Lord, and her strong faith, preaching power, and zeal for Lord are the things she instilled in her family “to stand on the Word of God. One of her famous statements was, “If God can’t do it, it can’t be done.”
Missionary Fannie Bell Terry fought a good fight and kept the faith, and on November 9, 2022, she received her “Starry Crown.”
Fannie Bell Terry was preceded in by her parents, Mitchell and Sarah Ann Nettles Debruce; husband, Lenton Sr.; her nine siblings, Carrie Bell Merritt, Johnnie L. DeBruce, Onnie Bell Edwards, Matthew Thomas DeBruce, Mattie Bell Key, M.C. DeBruce, Lillie Giles, James L. DeBruce, and Johnny B. DeBruce; and her three sons, Lenton “Jinx” Terry Jr., James Lewis Terry, and Clinton Terry.
Fannie leaves a legacy that will miss her wisdom, love, and fun-loving nature. Left to mourn her great loss, her children, Annie Mae Noel, Dr. Ollie Mae Jones, Odis Terry, Alice Mae Terry, and Lalonnie Mae Terry; her ten grandchildren, Quanita Williams, Crystal Noel, Cornelius Collier, Robin (Alhajji) Jumbe, Chareese (Donte) Thompson, Cassandra M. Blackmon, Siobhan Hill, Jason Jones, Larry Strong Jr., and Cortez Terry-Thompson; ten great-grandchildren, and ten great-great-grandchildren; as well as her nieces, nephews, family, and friends.
Fannie was a “Mama,” a friend, a prayer warrior, and a confidant to all she encountered. She will be incredibly missed by all that knew and loved her.

To leave a condolence, you can first sign into Facebook or fill out the below form with your name and email. [fbl_login_button redirect="https://calhounfuneral.com/obituary/fannie-bell-terry/?modal=light-candle" hide_if_logged="" size="medium" type="login_with" show_face="true"]
×