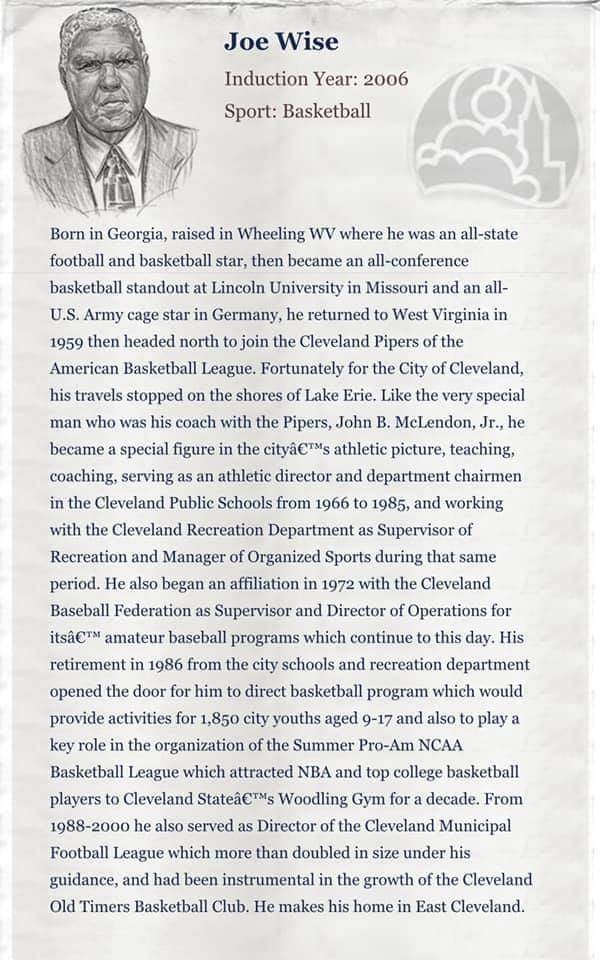 Born in Georgia, raised in Wheeling WV where he was an all-state football and basketball star, then became an all-conference basketball standout at Lincoln University in Missouri and an all-U.S. Army cage star in Germany, he returned to West Virginia in 1959 then headed north to join the Cleveland Pipers of the American Basketball League. Fortunately for the City of Cleveland, his travels stopped on the shores of Lake Erie. Like the very special man who was his coach with the Pipers, John B. McLendon, Jr., he became a special figure in the cityâ€™s athletic picture, teaching, coaching, serving as an athletic director and department chairmen in the Cleveland Public Schools from 1966 to 1985, and working with the Cleveland Recreation Department as Supervisor of Recreation and Manager of Organized Sports during that same period. He also began an affiliation in 1972 with the Cleveland Baseball Federation as Supervisor and Director of Operations for itsâ€™ amateur baseball programs which continue to this day. His retirement in 1986 from the city schools and recreation department opened the door for him to direct basketball program which would provide activities for 1,850 city youths aged 9-17 and also to play a key role in the organization of the Summer Pro-Am NCAA Basketball League which attracted NBA and top college basketball players to Cleveland Stateâ€™s Woodling Gym for a decade. From 1988-2000 he also served as Director of the Cleveland Municipal Football League which more than doubled in size under his guidance, and had been instrumental in the growth of the Cleveland Old Timers Basketball Club. He makes his home in East Cleveland.

To leave a condolence, you can first sign into Facebook or fill out the below form with your name and email. [fbl_login_button redirect="https://calhounfuneral.com/obituary/joseph-wise/?modal=light-candle" hide_if_logged="" size="medium" type="login_with" show_face="true"]
×