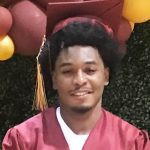 Until time of service.

Sincere grew up in Akron and graduated from Kenmore-Garfield High School, class of 2020. He was a very athletic young man. There was not a sport presented to him that he could not excel in. Whether the sport was basketball, he could not be stopped; football, he was packed with power; or track, he was the best. Sincere was not just athletic, he was highly intelligent. Not many people knew Sincere scored a 1200 on the ACT, before he graduated from high school. With all his talents and abilities, there is a few more that he really loved… eating sea food and being around family. He was a true “Mama’s boy” too. Anyone who knew Sincere would love him. His smile had been infectious since the day he was born.

Sincere was raised to know and understand Christian values as a child. Guided by his parents and both sets of grandparents, he knew God. Sincere will always be remembered and loved; he was one of a kind.

He was preceded in death by his grandmothers, Darlene Morrow and Paulette Matthews.

To leave a condolence, you can first sign into Facebook or fill out the below form with your name and email. [fbl_login_button redirect="https://calhounfuneral.com/obituary/sincere-laishaun-marrow/?modal=light-candle" hide_if_logged="" size="medium" type="login_with" show_face="true"]
×

Until time of service.