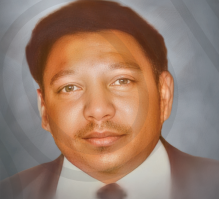 Anthony Ray Beverly affectionately known as Tony and “Turtle” by family and friends was born on January 31, 1957, in Cleveland, Ohio to the late Wilma Clayton and James Beverly. He accepted Christ as his savior and was baptized at Shiloh Baptist Church in Cleveland, Ohio. Tony departed this life suddenly on November 4, 2022.

Tony attended East Cleveland Public Schools and graduated from Shaw High School in 1976. Soon thereafter he became employed by the Ford Motor Company in Brookpark from where he retired. During his employment he was a proud union member of the UAW.

Tony was the oldest child and considered himself the boss and protector of his younger siblings and cousins which he grew up with. He was a popular student in high school where he played basketball and could be found hanging out in Korb Lounge which was a popular music and dance hangout at the high school. He was fun loving and kept in touch with many friends throughout the years. He enjoyed watching basketball and football. Tony especially enjoyed fishing and was a beast on the barbecue grill. In addition to these hobbies, he enjoyed music, dancing. playing the lottery and spending time with family and friends.

Tony was joined in holy matrimony with Francesca Pope on June 25. 1988. Together they raised three daughters, India, Aja and Quiana. He truly enjoyed spending time with his grandchildren.

To leave a condolence, you can first sign into Facebook or fill out the below form with your name and email. [fbl_login_button redirect="https://calhounfuneral.com/obituary/anthony-r-beverly/?modal=light-candle" hide_if_logged="" size="medium" type="login_with" show_face="true"]
×