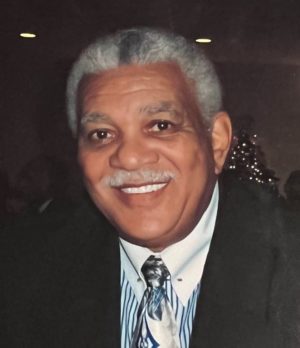 David S. Byers was born on June 23, 1939 in Birmingham, Alabama.  He is the only child of Damon and Ada Byers.

David accepted Christ at an early age, as a member of Open Door Baptist Church.  He later attended St. James AME Church.  He continued spiritual growth after joining St. Paul UMC.  David served as chairman of the Pastoral Parrish Relations Board & Finance and vice-chair of Administrative Board.  He also served on the Stewardship Board, Usher Board and was a member of the Men’s Association.

A graduate of East Technical High School in Cleveland, Ohio, David continued his education, graduating from Cuyahoga Community College, where he earned an Associate degree in Electronic & Electrical Technology.

David spent his final years, with his companion, Carolyn Whitley.

Several part-time jobs helped David & Sandra maintain their family, while continuing their thirst for their degrees.  David’s first full-time job was that of a truck driver, delivering newspapers for the Call & Post, a black weekly publication distributed predominately in the “Negro” neighborhoods.

David went to work in the main office of The Cleveland Electric Illuminating Company (CEI), in 1960 as a Record Clerk with duties of tracking field personnel as they moved about the system, maintaining department records and weekly & monthly report writing.  A promotion to Technician “C” relocated David to the Chemical Laboratory of the Production Engineering Department.  Advancing thru the ranks, David received six various promotions until he was appointed Supervisor of the Fuels and Materials Test Unit of the Production Engineering Department.  David retired from CEI at age 53, after completing thirty-two (32) years of service.

Novella & William Collins (deceased) introduced David and Sandra to a couples social club called the PLAYMATES.  For many years, this club provided many years of excitement, enjoyment and friendship that was invaluable.  They raised children, partied, camped out and cruised together.

While working at CEI, David coupled with 3 friends and established Arrow Printing Service which was incorporated in the State of Ohio.  Arrow was a full-service printing facility, specializing in the production of souvenir journals for major minority organizations.  Utilizing the latest computerized technology for typesetting, capitalization for the facility, exceeded $400,000.00.  Through the years, more than 25 young men and women were taught the skills of computer typesetting, offset press operation, composition/layout and bindery.  The building and the business was sold, due to aging of the partners and further advancement in methods of mass reproduction.

Several years after retirement, David helped his son, David C. open a full service 6,000 sq. ft. restaurant and lounge known as “Dave’s Place” which was located in a local strip mall known as Southgate.  The business was an immediate success and became “The Place to Be”.  The business provided jobs for some 40 employees, some of which were family members.

David loved fishing and cooking for family and friends.  He has served in every office of duty, as a member of the “Lake City Men’s Club” and served as secretary for “The Ambassadors” both of which are gentlemen’s clubs existing purely for the passion of fun, friendship, and social events.

On January 3, 2023 David underwent a major open heart surgery operation.  He came through the surgery fine and was transferred to a rehabilitation center on January 17th.  He was supposed to begin the physical therapy the day God called him home, January 20, 2023.

To leave a condolence, you can first sign into Facebook or fill out the below form with your name and email. [fbl_login_button redirect="https://calhounfuneral.com/obituary/david-s-byers/?modal=light-candle" hide_if_logged="" size="medium" type="login_with" show_face="true"]
×