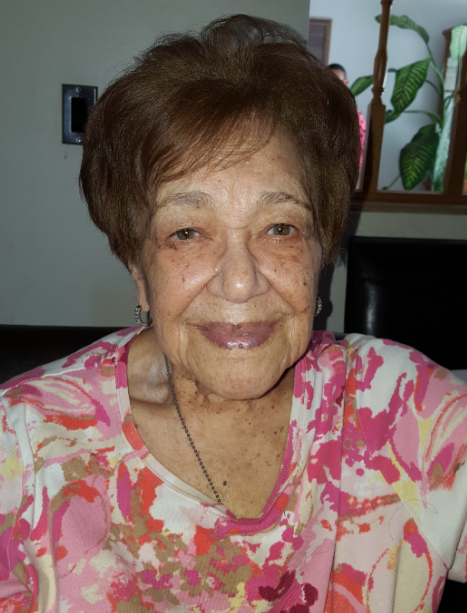 Earl Gibson and Irvine Reid were blessed with their bundle of joy on June 25, 1925, in Manchester, Jamaica where Ena spent her childhood.
In her early years, Ena accepted Christ as her Lord and Savior. She was baptized and attended Mount Sinai Baptist Church. The Lord was her guide in her parenting and daily life.
Ena Gibson, known as Mama & Ms. Ena to most, met Leslie Clarke at the early age of 17, married, and from that union had 4 children, Vilma, Neville, Eileen, and Sharon. Ena’s favorite things to do was cook, sew, and knit. She made all her children’s clothes, school uniforms, blankets, pillows; you name it, she made it! Ena’s favorite dishes to prepare were curry goat, pot roast, rice & peas, soups, and she made the best potato salad ever!
In 1967 Ena migrated to Cleveland, Ohio, and took a job at Doctors Hospital in Cleveland and then at St. Alexis Hospital where she worked as a Nurse’s Aide and finished her clinical career. Ena later met Timothy Bennett in 1969, he had 3 children, Owen, Garth, and Beverly so they became a blended family. Ena and Timothy married in 1983.
Ena began working for Foseco Manufacturing as a machine operator for more than 15 years and retired in 1994.
She loved to travel and traveled to London, Paris, Canada, Washington, New York, Detroit, Chicago, and many other places. Many of these trips were traveling with the Haslingden Cricket Club where Timothy was the President. Timothy took ill and passed away in 1995.
Mama was a loving and compassionate person. She treasured her friends & cared deeply for her family, always putting her children first, still cooking dinner for us even when we had our own family dinners prepared. She gave her children the world and asked for nothing.
Mama developed dementia approximately 10 years ago and it progressed slowly to where she had to leave her own home and move in with her son, Neville, and his wife, Deliska, for close care. We are so grateful that even as the disease progressed, Mama never stopped recognizing or acknowledging her children and most of her grandchildren. In her last two days, when visiting her, her children would ask her, “Who is Neville?” She responded, “That’s my son!” Then they would ask her, “Mama, do you know Sharon, Vilma, and Eileen?” She replied, “Yes, that’s my daughters”! Then her children would tell Ena how much they love her, and she responded, “I know!”
Preceding Ena in death are her parents, Earl Gibson and Irvine Reid; husband, Timothy Bennett; stepsons, Owen and Garth; son-in-law, Willie Williams; grandson, Wayne Osborne; and father of children, Leslie Clarke.
Ena leaves behind her sister, Sonia Treasure of Port St. Lucie Florida; her four children, Vilma Williams of Shaker Heights, Ohio, Neville (Deliska) Clarke of Maple Heights, Ohio, Eileen (Brian Sr.) Logan of Orlando/Clermont, Florida, Sharon (Tony) Thomas of Shaker Heights; stepdaughter, Beverly Bennett of New York; 17 Grandchildren, Shannon Clarke, Sasha Clarke, Letitia (Bernard) Williams-Lackey, Tracey-Ann Clarke, Kerry-Ann (Caleb) Stephens, Suzie-Ann Clarke, Andrew (Marla) Williams, Neville Clarke Jr., Doniel Clarke, Amanda Thomas, Briana Thomas, Celina Thomas, Brian Logan Jr., Jasmine (Jeff) Logan- Zielomski, Brittany (Jason) Garrett, Raymond Bennett, and Rodney Bennett; 23 great-grandchildren; and 5 great-great-Grandchildren; as well as a host of loved ones, cousins, nieces, nephews, and beloved friends.
Rest Well Mama! We love you and we will surely miss you! -The Bennett Family

To leave a condolence, you can first sign into Facebook or fill out the below form with your name and email. [fbl_login_button redirect="https://calhounfuneral.com/obituary/ena-hortense-bennett/?modal=light-candle" hide_if_logged="" size="medium" type="login_with" show_face="true"]
×