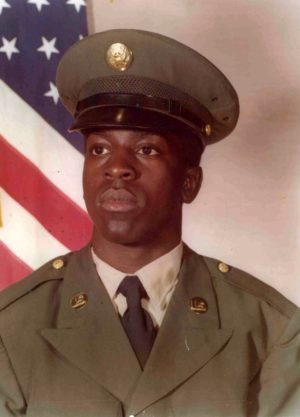 Keith Day was born October 12, 1957, in Cleveland, Ohio. He was the youngest son of nine children to Fred P. Oliver Sr., and Ida May Evans Day both (both preceded in death). As a child, Keith loved his siblings and growing up in a large family. He enjoyed watching football and riding his moped around the neighborhood. Keith loved God and attended Cleveland Church of Christ.
Keith was a student at Glenville High School and in 1976 he enrolled himself into Job Corp where he acquired entry level training and many other skills. Keith could visualize and build anything.
Because of Keith’s strong faith in God and his fear of nothing. He was a proud American and enlisted himself into the U.S Army in 1978. Keith took great pride in his military career, He loved driving the Army tank trucks. He completed his training at Fort Leonard Wood, Missouri and served two combat tours in the Gulf of War (Desert Storm) and Afghanistan. Keith was a well-known experience operator of army trucks amongst his comrades. He also had the opportunity to serve as a military guard for the Olympics games in 1996. He retired after 24 years of active duty.
Keith attended Patrick Henry Junior High School, and began dating Tonya Wall for several years, and in 1977, the couple celebrated their first child together Teraseita. Years later, Keith met and married Jewel Young-Day (preceded in death) and from this union two children were born; Keisha and Keith Day Jr. He loved his children tremendously and enjoy spending time with them often. In April of 1989, Keith married Shirley Jackson, and from this union, he was a devoted and loving grandfather to his granddaughter Suzette Day.
Keith was a hard worker and an asset to every company that employed him. At the time of his passing, Keith was a dedicated employee at The Garland Company.
Keith lived a happy life and though unexpected, died peacefully at home in his sleep. He is survived by his three children, Teraseita Wall -Dumas (Ronald), Keisha Day (Curtis Williams preceded in death), and Keith Day Jr. (Adriane); his beloved siblings, Dwight, Charlene, Charles, Wendy, Katrina (preceded in death), Freida, Fred, Sam, and his Uncle Eugene Wilson. He was a beloved grand-dad to nine grandchildren, Rafi, Ashley, Curteisha, Curtis Jr, Aalayah, Ke’Asia, and Akeilah and a host of nieces, nephews and friends.
Keith was a wonderful man, brother, father, and grandfather. He was proud of his children and grandchildren and was happiest when he was surrounded by the ones he loves. He will be truly missed and forever will live in the hearts of those who knew him.

To leave a condolence, you can first sign into Facebook or fill out the below form with your name and email. [fbl_login_button redirect="https://calhounfuneral.com/obituary/keith-l-day-sr/?modal=light-candle" hide_if_logged="" size="medium" type="login_with" show_face="true"]
×