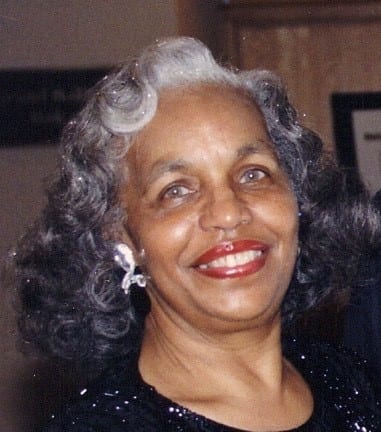 Merlyn I. Newland was born in Cleveland, OH, on March 7, 1927 to Emmett Maceo and Naomi Inez Butts. The 3rd eldest of eight children, Merlyn attended Cleveland Public Schools and graduated from John Hay High School. She was raised in the Kinsman neighborhood and attended St. John’s AME Church.

After graduation, Merlyn gained employment with a local dry cleaning company. She later joined Ohio Bell in 1962 as a Switchboard Operator where she held positions of increasing responsibility. Merlyn retired in 1991 as a member of management.

It was during her employment at the local dry cleaning company where she met and fell in love with Charles Newland. They married and were blessed with one daughter, Betty V. Newland Mance, their pride and joy. While the two divorced, they remained lifelong friends.

Jazz!!! Culture!!! Merlyn was both financially and personally committed to Karamu House, the oldest producing African American theater in the nation, Tri-C Jazz Festival, Cain Park, and Nighttown. In 2001, Merlyn was a founding member of Friends of Jazz, a group that provided Cleveland jazz lovers with a venue for socialization and an opportunity to satisfy their passion for jazz in a unique setting. She also spent many years as an active member of The Black Professionals Association.

Merlyn loved entertaining and engaging with her family, friends, and neighbors. She hosted weekly Friday game nights at her home with her siblings and welcomed their friends to join in on the fun. An avid Bid Whist player, Merlyn was a fierce competitor and she also participated in tournaments at Karamu House.

A resident of Cleveland Heights for more than 50 years, Merlyn loved her Century home and sitting on the front porch where she would greet her neighbors.

Everyone who met Merlyn quickly learned she was extremely proud of her family and all that they accomplished. She looked forward to family gatherings, especially the Butts Family Picnic. And, she could be counted on to be in attendance for the major accomplishments of her siblings, nieces, and nephews. As a result of her support of Central State University, Merlyn received an honorary alumni distinction.

Nothing made her happier than spending time with Betty. Whether she travelled to California for the holidays, or accompanied Betty on trips to Las Vegas, the Caribbean, or the Carolinas,  everyone who knew Merlyn understood how much she treasured time with her daughter. She especially enjoyed the trip her son-in-law, Charles, organized to Kiawah Island. Merlyn had a very special place in her heart for Charles, her sweet tooth buddy. And, she looked forward to their daily one-on-one time at breakfast.

In addition to the loving relationships Merlyn fostered with her family, she established long-lasting relationships with co-workers, neighbors and so many of the individuals who crossed her path. Her nieces were like daughters to her and she treated her nephews like sons. Merlyn also had a very special relationship with Safisha T. Mance Thomas, who she considered her granddaughter, Cassandra Brown, who she considered a daughter, and her dear friend of more than 60 years, Mary Bullock.

To leave a condolence, you can first sign into Facebook or fill out the below form with your name and email. [fbl_login_button redirect="https://calhounfuneral.com/obituary/merlyn-newland/?modal=light-candle" hide_if_logged="" size="medium" type="login_with" show_face="true"]
×