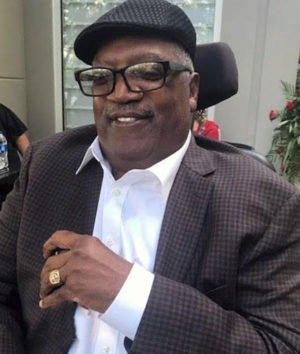 Mr. Gabriel “Bernard” Darby, age 70, went home to be with the Lord.

Gabriel “Bernard” Darby was born on February 4, 1952, to the union of Reverend Willie Hayes Darby and Clara Louise (née Goldsmith) in Twinsburg, Ohio. He was preceded in death by his father, Willie Hayes Darby, and siblings Elzenia Jones, Michael Darby and Willie George Darby.

Gabriel gained his education through the Twinsburg City School District for grammar and junior high, and was selected to attend Western Reserve Academy, a boarding and day college preparatory school located in Hudson, Ohio. He also attended R.B. Chamberlin – Twinsburg and John F. Kennedy-Cleveland High Schools graduating in 1971. He was active and lettered in football & wrestling and was also a member of the band playing the tuba.

Upon graduation, Gabriel was drafted into the armed forces, serving in the United States Army and was honorably discharged in 1974. He earned his college degree while in the Army.
His legs and back were wounded while serving in the Vietnam War, subsequently he became a wheelchair user. He endured seven surgeries (back and spinal cord region) to remove the shrapnel injured areas. He received a Purple Heart for his service and sacrifice. His 93-year-old mother still cherishes the medal. He also received the National Defense Service Medal; Good Conduct Medal Expert/ Rifle M-16; and Armed Forces Expeditionary Medal. The family thanks Gabriel’s caregiver, Elizabeth Mauzy, for providing VA-assisted long-term care.

Gabe had an entrepreneurial spirit. He was an intelligent man who knew a great deal about many things. He owned several businesses while living in Los Angeles, CA; Houston, TX; Waller, TX; and Youngstown, OH. As a civic minded member of Prairie View, TX, he served on many boards and committees. He was Treasurer, Prairie View Athletic Club, Vice President of the Prairie View Chamber of Commerce, and Vice President of two Prairie View Economic Development Corporations. He made a great impact on that community by initiating and completing an improvement that impacted the railroad and the community. He was respected in the Prairie View/Waller/Hempstead communities. Gabriel was also a Mason, initiated as a member of the Hempstead Lodge.

While his injury could have been debilitating, his determination motivated him to build a home for his wife at the time, Vera, and family. The 8,000 square-foot home was designed to provide a comfortable retreat for all of his family and friends. Many from the community were seen around the indoor pool or the jukebox during their holiday celebrations. Gabe loved the land and his property in Waller. A fun time for him would be riding his John Deere tractor while cutting acres, followed by fishing in the pond with his buddies.

His family and friends will miss his daily calls, texts and witnessing his determination in the way he lived his life. Education served as a pillar in his life. It was important to him that his children receive their college degrees, and they all have.

To leave a condolence, you can first sign into Facebook or fill out the below form with your name and email. [fbl_login_button redirect="https://calhounfuneral.com/obituary/mr-gabriel-benard-darby/?modal=light-candle" hide_if_logged="" size="medium" type="login_with" show_face="true"]
×